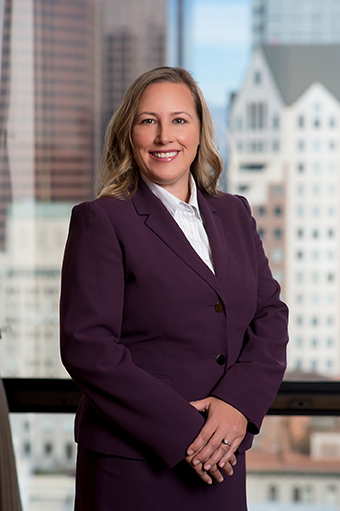 Erin Donovan is a partner in the Firm’s Los Angeles office.  Her principal practice areas include general civil litigation, business litigation, insurance coverage and defense litigation, and probate litigation.  She has participated in five trials (three civil and two probate) and as lead counsel, has successfully obtained a defense award at arbitration. In addition to representing insurance companies and their insureds, she has served as counsel for a variety of businesses, academic institutions, universities and charter schools.

"First Contact – Critical Evidence Can Often Best Be Uncovered Through the Appropriate Use of Informal Discovery," Los Angeles Lawyer,October 2004 (PDF).

Between college and law school, Ms. Donovan was a Los Angeles corps member with Teach for America.  She taught kindergarten and first grade at Thomas Jefferson Elementary in Compton, California from 1997 to 2000. She has used this valuable experience to connect with teachers, principals and executives in her representation of academic institutions, universities, and charter schools.