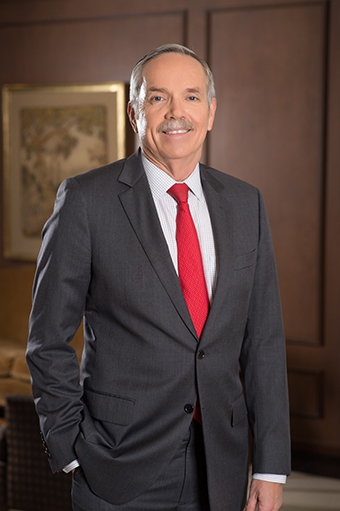 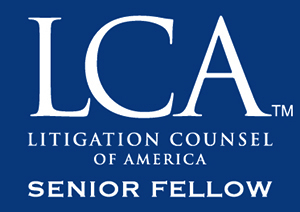 A partner in the Firm's Los Angeles office, Daniel J. Woods is one of the most accomplished and decorated litigators in Los Angeles, indeed, the entire country. The American Bar Association, California Bar Association, Inner City Law Center, Chambers USA and Los Angeles Daily Journal are just some of the publications and peer organizations which have honored Mr. Woods for his work.

Two recent cases highlight Mr. Woods’ ability to obtain significant results on behalf of clients in a variety of cases.

After lengthy pre-hearing proceedings, in December 2020, an ITC Administrative Law Judge in Washington D.C. conducted a three-day, remote, evidentiary hearing involving lawyers and witnesses from around the country.  In February 2021, the Administrative Law Judge issued a 300-page decision in which he found that the MacSports chairs did not infringe its competitor's patents.  Mr. Woods’ devastating cross-examination of GCI’s expert witness was critical to this finding.

On May 6, 2021, the full ITC issued its decision affirming the finding that MacSports’ chairs did not infringe the patent and terminated the investigation.

In 2021, he also defeated not one, but two motions for class certification for a municipality client sued for violations of the ADA and related claims.

He defeated a $300 million antitrust claim brought by a prominent litigation firm and obtained a judgment for over $2 million in defense fees and costs. The case involved an Indian yarn spinner filing a $300 million Sherman Act Section 1 antitrust lawsuit against Mr. Woods' client, cotton-grower J.G. Boswell Company.  In May 2018, Mr. Woods won the arbitration with the three-judge panel ruling in J.G Boswell’s favor on every point and also awarded it over $2 million in fees and costs.

In Dexter Street Limited Partnership v. Wells Fargo Bank, Mr. Woods represented Wells Fargo in a commercial lease dispute. Dexter sought approximately $8 million in this long-running case. Mr. Woods secured a unanimous jury verdict for Wells Fargo on three of Dexter’s four specific claims and while it found in favor of Dexter on the fourth claim, awarded it only $1 in nominal damages, based on the suggestion to do so in Mr. Woods’ closing argument.

His greatest and most well-known case came when he represented the Log Cabin Republicans in the well-publicized “Don’t Ask, Don’t Tell” trial which ended the United States Military’s discriminatory policy towards the LGBTQ community. The trial took place in the Central District of California in July 2010 and Mr. Woods, on behalf of his client, won a judgment declaring the US military's "Don't Ask, Don't Tell" (DADT) policy to be unconstitutional and an injunction against further enforcement of the policy on due process and First Amendment grounds. Mr. Woods litigated the case over the course of seven years on a pro bono basis, and it was his truly tenacious efforts that even got the case to trial in the first place. Mr. Woods was in attendance when the President signed the official repeal of the policy.  For this work, he won high praise from peers, military leaders, members of the LGBTQ community and a score of others.

Mr. Woods’ other victories include:

In his spare time, Mr. Woods has authored many articles and, for 20 years, authored the annual update to the California Continuing Education of the Bar’s three-volume treatise, California Civil Procedure During Trial.  Mr. Woods' publications include:

Mr. Woods has received almost every honor in the legal industry, and has received some of these honors multiple times. The American Bar Association, California Bar Association, The Salvation Army and Inner City Law Center have all recognized and honored Mr. Woods for his work, his achievements and his ability to deliver one-of-a-kind results.  Benchmark Litigation named him as one of the Top 100 Trial Lawyers in America.

Among the awards he has received, Mr. Woods was named one of the Top 100 Attorneys in California by the Los Angeles Daily Journal and San Francisco Daily Journal in 2011.  In 2011, Mr. Woods was awarded the ABA's John Minor Wisdom Public Interest and Professionalism Award.  He received a 2011 California Lawyer Attorney of the Year Award, and was named a 2010 Attorney of the Year by the Recorder.  Mr. Woods was presented with the 2011 "Partner in Mission" award by The Salvation Army.  The Log Cabin Republicans presented him with the "President Ronald Reagan Award" for 2011.  Mr. Woods has twice received the Katherine Krause Award presented by the Inner City Law Center for outstanding leadership and service to its clients, tenants in slum housing buildings, (2000 and 2021), and was a recipient of the California State Bar President's Award for Pro Bono Service.  Mr. Woods has been selected to the 2016 Irish Legal 100, an annual compilation of the top 100 lawyers in the United States of Irish descent.

Among the publications that have recognized him, Mr. Woods has been recognized as a leading litigator by Chambers USA each year from 2006-2020.  The 2019 Chambers USA highlighted that his clients felt "Dan has a presence in the Courtroom" and "is smart and articulate."  Chambers USA has also noted Mr. Woods’ clients appreciate his ability to accurately predict the outcome of a case and admire his confident trial skills.  The Daily Journal recognized Mr. Woods in their Top Verdicts of 2018 Supplement for an Antitrust Verdict in the Central District. Mr. Woods has also been recognized as a California "Litigation Star" in Benchmark Litigation for 2010, 2011, 2014, 2016, 2018, 2020 and 2022, and named a "Super Lawyer" in the Southern California Super Lawyers Edition each year since 2004.